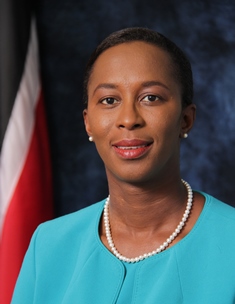 Ms. Nicole Olivierre was elected to the House of Representatives as the Member for La Brea in the 11th Parliament of the Republic of Trinidad and Tobago on Monday September 7, 2015. Ms Olivierre served as the Minister of Energy and Energy Industries from September 2015 to October 2016. Ms Olivierre was named Parliamentary Secretary in the Ministry of Energy and Energy Industries on June 30, 2017.

Ms. Olivierre has over fourteen (14) years’ experience in the oil and gas industry. She is the holder of a BSc in Chemistry and Computer Science (First Class Honours) and a Master of Philosophy Degree (MPhil) in Chemistry of Natural Products from the University of the West Indies.

Ms. Olivierre’s career in the energy sector began as a laboratory technician at Trintopec, Santa Flora. She later joined the National Gas Company, where she worked in various functions including project analysis and development, business development, negotiation, strategy formulation, and enterprise risk management. She has contributed to the negotiations pertaining to Atlantic LNG Train 4, including plant construction, gas processing, cross-island pipeline and gas transportation agreements. She is certified in the areas of Risk Management and Financial Management.

Ms. Olivierre is passionate about the development of local content to ensure that Trinidad and Tobago achieves maximum benefits from its resources.