The Division is under the management of a Director, Resource Management who reports directly to the Permanent Secretary of the Ministry of Energy and Energy Affairs. The Division is staffed by geologists, geophysicists, petroleum engineers, draughtsmen, Geographic Information Systems personnel and geological assistants. The general aim of the Division is to ensure timely and sustainable development of the nation’s petroleum resources through policy formulation, technical planning and management for the Upstream Petroleum Industry.

The primary functions of the Division include:

To undertake these functions the Division is structured as follows:

The Division also contributes to non-recurrent matters of interest to the State either through staff expertise or those arising from the accumulated geological, geophysical and engineering dataset. Examples include boundary deliberations with neighbouring countries, reserves dispute resolution, unitisation and mitigation of geological risks arising from natural phenomena.

The unit facilitates exploration for oil and gas resources by the planning and management of acreage enhancement projects to widen the knowledge base in under-explored areas. Geological, geophysical and engineering evaluations are carried out in these areas, either internally or by third parties, and is used to guide upstream policy and commercial decision-making.
The availability of new blocks for petroleum exploration is critical to the sustainability of the country’s energy sector since new discoveries are paramount to the replacement of produced existing reserves. The unit manages Competitive Bidding Licence Rounds which make acreage available for exploration. In managing the licence rounds, the knowledge gained from acreage enhancement exercises is utilised to promote the areas which the Government offers. The unit also provides the data and information to interested investors and licenses data to interested petroleum companies to enhance their evaluations of the areas offered. In fact data is always available for viewing and/or licensing at the Ministry.

The Acreage Management unit is responsible for ensuring all producing fields are optimally exploited. The following points summarise the unit’s main tasks:

The Ministry of Energy & Energy Affairs is the organisation charged with the collection, storage and dissemination of all data acquired as a result of petroleum operations in Trinidad and Tobago. There is currently a large store of data related to exploration and development activities which are invaluable to the upstream and downstream sectors and ultimately, the nation’s wealth.
At this time, the issues of data/information management are occupying centre stage as the Ministry works toward bringing its data and information management portfolio into the electronic age.
Non-confidential well and seismic data can be requested for viewing or purchase by sending an email directly to bidround@energy.gov.tt
Also available for purchase are the Transactions of the 4th Latin American Geological Conference Volumes 1 & 2 and the Transactions of the 4th Caribbean Geological Conference (US$40 per volume)

The role of the Draughting unit is to prepare maps relevant to the Ministry’s business.
The products presently available for licensing are:

The unit partners with all divisions within the Ministry of Energy and Energy Affairs and other government agencies to produce graphical data that represents the various aspects of the energy and mineral industries of Trinidad and Tobago.
The Ministry does not have a fully functional GIS Unit, but it is the aim that in a fully restructured Ministry, this will be one of the key units.

The National Oil Audit is currently being conducted by Ryder Scott Company (RSC) of Houston, Texas, selected by a through a tender process that was initiated in July 2008 by the Petroleum Company of Trinidad and Tobago on behalf of the Ministry.
Upon acceptance of the award, RSC began the audit in October 2008. The audit will generate reserves on both conventional and unconventional (heavy) oil; however the emphasis will be on the unconventional oil which will be the focus of development in the future. The audit is scheduled for completion in March 2009.

While Cross Border Matters are handled by the Ministry of Foreign Affairs, the Ministry of Energy and Energy Affairs provides the technical support to Foreign Affairs. Trinidad and Tobago and Venezuela have several identified gas fields which straddle the Maritime Boundary between the countries. They include:

The resources in place and the proportion allocated to each country have been agreed between the countries. The Loran – Manatee Unitisation Treaty has been drafted and we are now awaiting agreement to the Treaty before development can proceed.

The Kapok Field is located off the south-east coast of Trinidad, adjacent to the southern Maritime Boundary with Venezuela, whose corresponding field is the Dorado Field. The work of the Reservoir Technical Working Group of the Kapok- Dorado cross-border unitization project has been ongoing for approximately four years, inclusive of a 2 year hiatus, and is in its final stages. The final report of the Group has been submitted and has to be considered by the Governments of both countries before agreement to and adoption of the results.

The Reservoir Technical Working Group has been constituted and is comprised of representatives of the Ministry of Energy and Energy Affairs, bpTT (operator of Block 5b in Trinidad waters), Petroleos de Venezuela S.A. (PDVSA) and StatoilHydro (operator of Block 4 Venezuelan waters). The Terms of Reference of the group is to define which hydrocarbon reservoirs, and in what proportion, of the Manakin-Cocuina field straddle the Maritime Boundary.

Data is available for viewing in anticipation for the formal opening of the competitive bid round. The blocks on offer will include North Coast Marine Area (NCMA) 2, 3, 4, 5 and East Coast Marine Area Blocks 4b and 5d.
Blocks in the Trinidad and Tobago Deep Atlantic Area (TTDAA) are also positioned for Competitive Bidding in the near future.

Trinidad and Tobago having ratified the United Nations Convention on the Law of the Sea (UNCLOS) and having satisfied the conditions outlined in Article 76 of the said Convention for extending its continental shelf beyond its Exclusive Economic Zone i.e 200 nautical miles, prepared a submission for so doing, to the Commission on the Limits of the Continental Shelf which is the body set up under Annex 2 of the Convention to adjudicate on such claims.
The submission was completed by a Cabinet appointed a Committee comprising mainly personnel from the Ministry of Energy and Energy Affairs and the Ministry of Foreign Affairs and supported by personnel from other state agencies.
The deadline for completion and presentation of the submission to the United Nations was May 13th 2009.
A successful submission will enable Trinidad and Tobago to exercise sovereign rights over the extended shelf for the purpose of exploring and exploiting its natural resources.

The Ministry of Energy and Energy Affairs has successfully acquired a speculative 2D seismic survey in conjunction with Petroleum Geo-Services (PGS). Surveying began in early June and was completed in August 2008. The acquisition programme consisted of three sub surveys. The first (2,389 line km) covered blocks in the North Coast Marine Area (NCMA 4 and NCMA 5) which will eventually be put out for Competitive Bidding in the first quarter of 2009. The second (2,481 line km) covered the generally unexplored Tobago Trough and the last survey of 1,964 line km consisted of several very long lines over the deep and ultra-deep areas.

PGS has delivered final product for the NCMA 4&5 sub-survey and processed the Tobago Trough and deep and ultra-deep sub-surveys. The seismic data package is available from PGS. 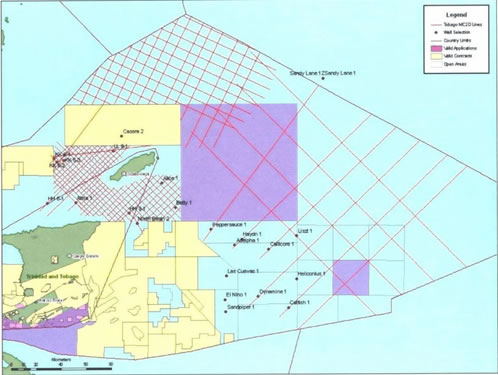 In response to limited success of the Trinidad Deep Atlantic Bid Round, The Ministry of Energy and Energy Affairs, through its technical consultants Dynamic Global Advisors, acting on behalf of GXTechnology, has completed a study aimed at technically de-risking the area. Two phases of the study are completed. The first phase of the study is entitled “A New Look at Eastern Deep Water Trinidad; Seismic Interpretation and Exploration Review” and the second phase, “Basin to Leads, Risks and Reserves: Exploration Potential of the Trinidad & Tobago Deep Atlantic Area”. The results of these studies have been very encouraging in terms of defining the potential of this acreage. 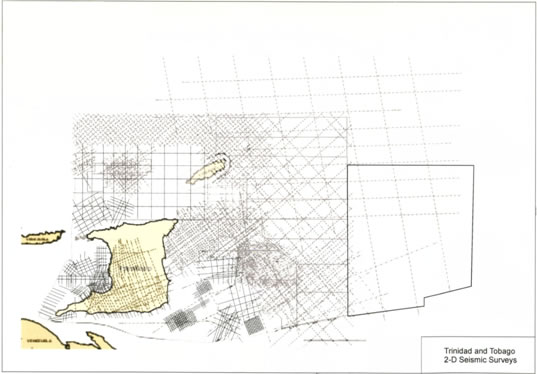 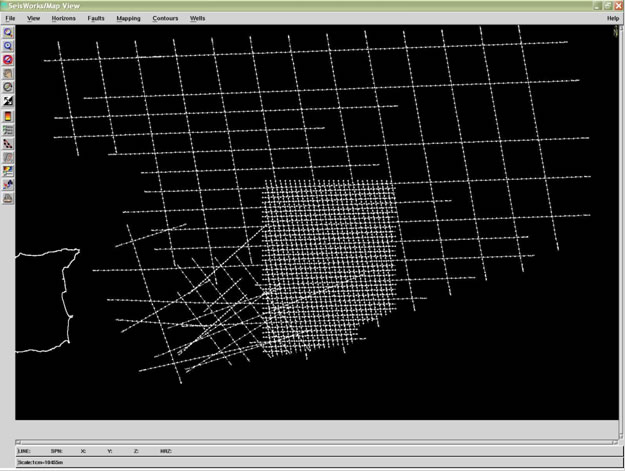 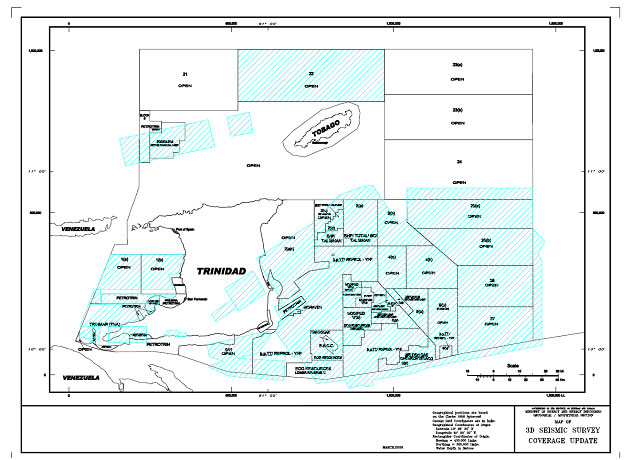 Staff are currently being trained in GIS techniques and software while the GIS database is being populated. The Concession Map is continuously being updated with the information from this map used to populate the ARCGiS 9.2 database.