Liquefied natural gas (LNG) provides a relatively clean source of energy and is price-competitive with other fuels for distant markets. In recent years, LNG is has become a critical element in meeting the world’s burgeoning energy needs.

The Role of the Government in the LNG Industry

An LNG project is a major undertaking because of its capital intensive nature and can have a significant impact on the national economy. The initiatives of the Government of Trinidad and Tobago to optimise its position in the LNG industry are geared toward revenue maximisation, extraction of value along the LNG value chain, as well as securing market share. These goals are in fulfilment of the Strategic Plan for the Energy Sector.

The Government’s key position in the industry is defined through its role in:

The Government’s direct take in the LNG Industry comes from:

Trinidad and Tobago entered the LNG business in 1999 when Atlantic LNG Train 1 was commissioned.

The LNG Value Chain: What is it?

The range of activities involved in the LNG business is collectively referred to as the LNG Value Chain (see Figure 1). 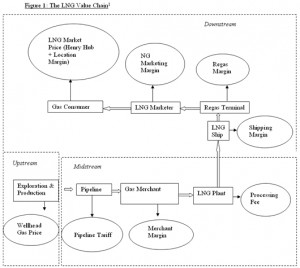