A new petroleum fiscal regime was approved and subsequently implemented by the Finance Act 13 of 2010. The new fiscal regime introduced initiatives that sought to improve this country’s competitiveness and attractiveness to potential investors, both locally and globally. In achieving these objectives, emphasis was placed on the competitive bid process; the terms and conditions of the contractual arrangements to be offered under future competitive bid rounds as well as the incentives offered under the concessionary (tax/royalty) arrangements. Details of the 2010 fiscal initiatives are outlined below under the following headings:

A. The Competitive Bidding Process

Administratively, a new competitive bid process was designed to provide for simplicity and a shorter time-frame between the start of the bid process and the signing of the contract. A major feature of the process is the reduction of biddable items to two items, namely the work programmes and Government’s Share of Profit Petroleum. Under the new process companies are able to self-assess their work programmes, while the Government’s Share of Profit Petroleum which is a more competitive item is assessed by the Technical Evaluation Committee.

A new requirement of the process is the prequalification of companies to determine not only their financial and technical competencies but most importantly, their status as a potential Operator for the acreage. This will ensure that the most suitable and efficient companies are selected to operate this country’s acreage.

Another feature that has been introduced is the nomination of acreages by companies. This feature provides an opportunity for companies to indicate the acreages they wish to be considered for inclusion into the upcoming competitive bid rounds. The Ministry of Energy and Energy Affairs still reserves the right to decide on the final acreage that would be offered under any competitive bid round.

It is planned that the entire process from the official announcement of the competitive bid round to the signing of the contract should take no more than nine months.

A more conventional-styled PSC similar in some aspects to the 1995/1996 Competitive Bid Round has replaced the 2006 Taxable PSC. This new form PSC is designed to treat with risks and encourage investment in shallow water-depths (less than 400 metres); average water depths (of more than 400 to 1000 metres) and deep-water (depths greater than 1000 metres) acreage.

Under the 2010 PSC model, the GORTT’s Share of Profit Petroleum is required to satisfy the Contractor’s liability for Petroleum Profits Tax, Unemployment Levy, Supplemental Petroleum Tax, Royalty, Oil Impost, Petroleum Production Levy and Green Fund. The exceptions are Withholding Taxes and Stamp Duty which must be paid directly by the Contractor. Legislative changes were made to the Petroleum Taxes Act to give effect to this form of production sharing contract. A major feature of the PSC is that it provides fiscal stability to the companies.

Like the 1995/1996 PSC, the matrices for the Government’s Share of Profit Petroleum are open for bidding by the companies. Further to this, the price bands and production bands for these matrices are reflective of the expected pricing and cost environments. The windfall feature, first introduced under the taxable production sharing contract, is retained.

Some other features of the model PSC include as follows:

Like the 1995/1996 models, these new PSCs do not provide for consolidation. As such, costs and expenses incurred are recoverable from the given production sharing contract; no consolidation of accounts between contracts or licences will be allowed. This departs from the Taxable PSC that provided for some limited consolidation.

A Carried Participation for the State of not more than 20% is a feature of the shallow water-depth acreage (400 metres and less) only. At this time carried participation is not considered for the average and deep water-depths acreage. This measure forms part of Government’s overall policy for broadening accessibility to its resources and as an avenue for expanding capability and capacity within the state sector.

Many of the financial obligations of the PSC are no longer biddable items and are clearly fixed and stated in the contract. By so doing, this has removed the upfront risk to investors and improved the project economics. Additionally, this allows focus to be placed on the two key areas – the work programmes and sharing of profit petroleum.

Payment of signature bonuses remains a feature of the shallow and average water depth acreage. However for the deep water acreage, signature bonuses will only be required in the event that two or more companies achieve equal points at the end of the bid process.

Given the cost and risks involved in exploring in average-water depths and deep water environments, additional incentives were provided to increase the attractiveness of these areas. For tax purposes only, firstly, the definition of deep water acreages was amended to include areas that are located in depths of more than 400 metres and secondly, a Petroleum Profit Tax rate of 35% was introduced specifically for the deep water acreage.

It should be noted that an uplift of 40% in computing capital allowances was granted for capital expenditures on exploration activities in respect of deep water.

With respect to the concessionary arrangements, emphasis was placed on those areas and activities where incentives for revitalization and sustainability were required, such as in the small offshore oil acreages, mature acreages both offshore and on land as well as where enhanced oil recovery projects are undertaken. The incentives geared specifically to encourage investment in crude oil production, directly impact the Supplemental Petroleum Tax that will be payable by companies. In so doing, it will provide companies with additional cash flows for re-investment in the upstream sector.

The Supplemental Petroleum Tax is regarded as a windfall tax that is charged on gross income from the disposal of crude oil less royalty and over-riding royalty.

Under the new SPT regime, the classification of differing rates for pre and post 1988 was maintained for marine operations. However with respect to land produced crudes, due to several joint arrangements, new entrants and the new licences that were granted to Petrotrin in 2007, this concept was no longer relevant. Consideration was also taken of the prevailing cost environment in which the companies operate.

As such, the new schedule of rates was simplified accordingly as follows:

Scale of Supplemental Petroleum Tax for 2010

An Investment Tax Credit equivalent to 20% on qualifying capital expenditure is provided for mature oil fields (either land or marine). With respect to enhanced oil recovery projects utilising steam, carbon dioxide (CO2),or water flood injection, a 20% tax credit on qualifying capital expenditure is also granted. Under this provision, companies will only be eligible for one of these investment tax credits in respect of any particular field. Only expenditure in respect of crude oil operations will be considered for this incentive.

Qualifying capital expenditure for investment tax credit will be defined as direct tangible and intangible costs (exclusive of all dry holes) incurred in field development activity for both marine and land oil fields, and capital expenditure incurred in the acquisition of plant and machinery as specified for EOR projects. Finance costs, administrative costs and other indirect costs are not to be included for the credit.

These fiscal measures together with several others are geared towards improving this country’s investment climate and creating opportunities for enhanced activities in the petroleum sector. In so doing, these measures will promote this country’s economic recovery and long term sustainability.

An amendment was made to the Petroleum Act to allow licensees to issue sub-licences in marine areas. Previously, this provision was only applicable to land operations. It offers companies opportunities to stimulate activities on idle and/or maturing acreage

See Appendix 1 and 2 below for the main Taxes applied in the Petroleum Fiscal Regime.

Main Taxes At A Glance 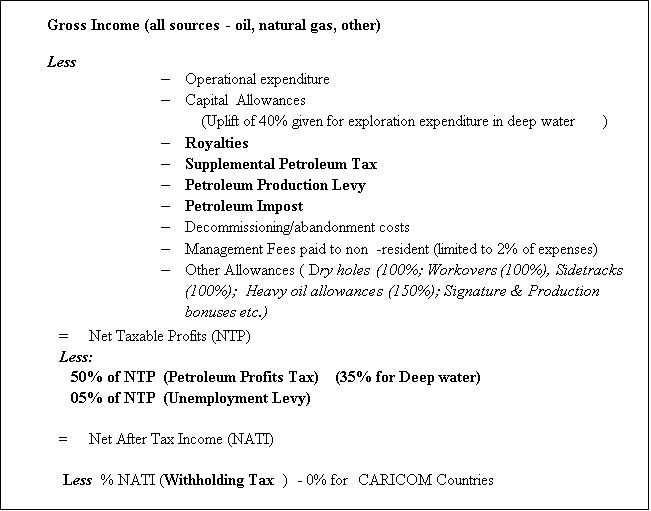 Section 15 of the Petroleum Taxes Act was amended to grant incentives for exploration wells drilled in deep horizon on land or shallow marine areas by increasing the expenditure to 140% before computing the capital allowances.

Accordingly, any person, who incurs capital expenditure in respect of the drilling of exploration wells in deep horizon on land or in shallow marine areas, shall be granted capital allowances on the exploration expenditure calculated by reference to 140% of such expenditure, subject to the following conditions:

a) Harmonistion of SPT Rates for Marine Areas

The distinction of Pre-1988 and Post-1988 SPT rates in 2010 for marine areas was removed and one SPT rate now apply for all marine areas with the exception of deep-water and new field development as shown below.

The formula used in determining SPT rates above US$90/bbl. will continue as well as the SPT rates used for land and deep.

b) Introduction of a Special SPT Rate for New Field Development

A new field is defined as an area within the Licence or contract area consisting of a petroleum reservoir or multiple petroleum reservoirs all grouped on or related to the same individual geological structural feature or stratigraphic conditions from which petroleum may be produced and where the total recoverable reserves are not more than 50 million barrels of oil equivalent and that comes into production after 1st January, 2013. The recoverable reserves must be certified by the Ministry of Energy and Energy Affairs before commencement of production and at the beginning of each financial year.

Scale of Supplemental Petroleum Tax for 2013

Finance Act No.4, 2014 introduced the following additional incentives to further stimulate exploration and development activities in the sector:

An Investment Tax Credit was introduced with effect from 1.1.2011, under the Supplemental Petroleum Tax regime.  This incentive allows companies to claim 20% of the expenditure on development activity for mature fields and enhanced oil recovery projects as a credit against their Supplemental Petroleum Tax Liability.  The credit is however only available for use in the financial year in which the expense is incurred and any un-used tax credits cannot be carried forward or backward to another financial year. To ensure continuity of these activities and to increase new investments, Finance Act No.4, 2014 will now allow the un-used tax credits to be carried forward for one year.

Capital allowance reliefs provide a mechanism that allows for the early recovery of investments. The capital allowances for the upstream energy sector have been simplified and accelerated as follows:

The existing initial and annual allowances are replaced by a new allowance of 100% of exploration costs to be written off in the year the expenditure is incurred. This incentive will be applicable for the period 2014 to 2017.

An allowance of 100% of the total costs of work-overs and qualifying side-tracks in the year incurred.

The wear and tear allowance for compression facilities acquired for use in the mid-stream natural gas sector is increased from 25% to 33.3%.